Pectineus Pain: How to Treat a Groin Pull

I was hanging out with my wife and her friends, one of which was accompanied by a date.  We got to talking and a simple bar chat turned into a conversation about a groin injury he had sustained.  At first, his description seemed like a routine groin strain.  The more we talked the less typical it seemed. 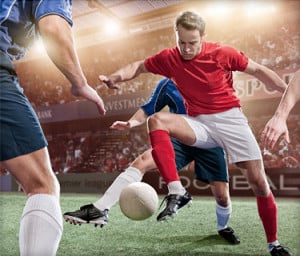 The beau was a 32 year old fit Spanish computer specialist injured during a soccer match.   He recalls forcefully kicking up and across his body like he had done several times before.  This time however he felt an immediate pull in the muscle that resulted in groin pull for which he sought treatment after a couple weeks for non-resolution of symptoms.  His injury initially responded to physical therapy which included soft tissue work and stretching among other passive modalities although he felt it took longer than it should.  He decided to start playing again.  He felt no discomfort running or dribbling and decided to play a little harder.   On attempting a forceful kick he felt the pull again.  His symptoms returned and now radiated to his genitals which worried him.  He continued physical therapy of what sounded like the primary adductor muscles of the thigh.  However, this time symptoms plateaued and continued as deep rooted anterior medial hip ache radiating into the lateral scrotum that had no appreciable provocative or palliative features.  Interestingly he noted no limitations to ADLs.  Specifically there was no symptom reproduction with walking, running, squatting or resisted adduction.  He noted that crossing/uncrossing his leg while seated aggravated his complaints momentarily. 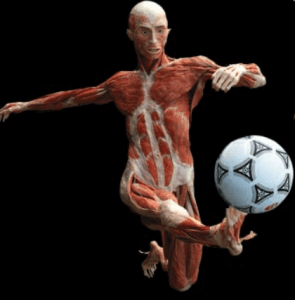 Groin pulls are quite common in athletes with an estimated incidence anywhere between 10-20% in hockey and soccer.  Obviously groin strains are not limited to these two sports but they are the ones most reported in the literature. In addition, these figures may be skewed due to non-reporting of injuries (5) While groin strains are common, the described pain pattern seemed atypical.  Technology is very useful in these situations.  A quick search landed me on Travel and Simon’s Trigger point manual. The documented symptoms and presentation matched our beau’s phenotype.  I gave him my card, wrote down pectineus, and advised him to give that to his treating provider.  I never saw our friend again but our interaction prompted the writing of this article.

The pectineus muscle originates at the superior ramus of the pubis and inserts into the pectineal line of the femur just inferior to the lesser trochanter.  It may be further subdivided into a superficial or lateral component and deep or medial component. It is primarily innervated by the femoral nerve arising from L2-3 nerve roots with dominant contribution by L2 with some contribution from the obturator nerve (6).  If this is the case the femoral nerve supplies the lateral portion and the obturator the medial portion. Pectineus overlies the uppermost fibers of adductor brevis.  Its fibers run obliquely and it is considered a transitional muscle between anterior and medial compartments (6). 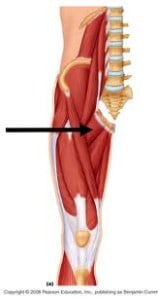 Its short lever arm makes pectineus well suited to flexion and in particular adduction of the flexed thigh so much so that pectineus and iliopsoas can cross one thigh over the other from a seated position, i.e.  , 90 degrees of hip flexion (1). This finding may explain why our friend felt discomfort of crossing his legs.  Pectineus is built for power rather than speed and its leverage increases with flexion and adduction (1).  EMG studies of pectineus confirm this assertion.  Specifically, EMG findings for adductor magnus, adductor longus and gracilis revealed the most activation with hips 0 or 45 degrees of flexion while for pectineus activation was highest at 90 degrees (2).  A different study measuring pectineus activation in relation to hip motion showed pectineus was highly activated during hip flexion exercises and moderately activated during exercises requiring rotational hip stabilization in either direction, as opposed to internal hip rotation as was originally hypothesized (3). This study also tested piriformis activation.  The observations therein indicated that the pectineus and piriformis significantly contribute to hip stabilization. This finding may explain injury recurrence and becomes important in developing rehabilitation strategies.

As it pertains to diagnosing, risk factors for a groin pull in general are in imbalance in adductor/abductor strength.  Previous groin strains significantly increase the likelihood of repeat injuries possibly because they further contribute to strength imbalances and hip instability (5).  In fact, injury history was a significant factor in the EMG output for the adductor longus, pectineus and gracilis but not adductor magnus (2).   As it pertains to pectineus injuries the mechanism may include forceful hip flexion/adduction or a stabilization injury which may explain increased groin strains in ice hockey players.  Pectineus injuries become apparent with persistent groin pain after remaining adductors and/or iliopsoas have been successfully treated especially when the patient complains of vague poorly localized pain in the anterior hip, proximal groin, and/or lateral genitalia (1).  As a final consideration if an adductor strain is not the source groin pain consider athletic pubalgia.  In a small study of confirmed pubalgia in athletes, pectineus abnormalities on pelvic MR accounted for 20% of the cases but hat is a topic for another day (4).

Lessons learned.  First, Ocam’s razor teaches us to look for the obvious in place of the obscure. When this yields mediocre results or things make sense, look deeper.  Thomas Edison admonished, “every wrong attempt discarded is another step forward.” Second, the patient’s story is still the most critical part of a patient encounter. Third, we are not always right but the piecing together of information is the art of what we do.  Finally, many of you may ask, “how do you know if it helped?”  I don’t.  But I learned something new in the process and thought it worth sharing.  This information may help someone else someday.

What Patient’s Are Saying….

Dr. López and his staff are the most amazing people. I walked in with major discomfort in my lower back and after my adjustment. I was able to walk a lot better after the visit. Thank you Dr. Lopez.☺️